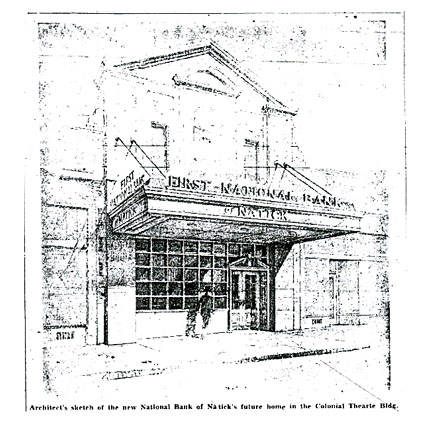 On August 1, 1957, Joe Feldman of R&L Furniture announced the purchase of the Colonial Theatre along with the block of shops surrounding it. The decision to close was made and by the fall, it was over.  Here is a selection of ads from the Natick Bulletin from the 1954-1955 period.
The end of November 1957, marked the last performances at the Colonial. Final ad in the Natick Bulletin shows "Operation Mad Ball" starring Jack Lemmon, Kathryn Grant, and Ernie Kovacs with co-feature Quantez starring Fred MacMurray and Dorothy Malone as the last films, with show times thru Saturday Nov 30. The newspaper of December 5, 1957 had these final words: "this week the Colonial theatre closed it's doors for the final time. With the movie business throughout the country giving way to television and open air establishments, it was obvious many months ago that the Colonial's days were numbered. However, it was rather nostalgic to realize that the once popular theatre would no longer provide entertainment for the people of Natick." The following June 5, 1958, Selectmen read a letter into the record from some of their youngest constituents. One remarked "after reading it over, we still don't know whether to call it democracy in action, the adolescent gripers, or youth hurls a challenge.

"Dear Sirs, We the children of this town declare that unless we receive permission to have our theatre back we shall close the schools. The teachers shall have nothing to say about it same with many other places. The theatre will be paid for by the people who had the bank put in will gladly remove it or else. Put your answer in the Bulletin 1 week from today so that we will know what to do. The theatre shall be put in its original place if not we shall go to the Supreme Court and the governor until we get it back in it's original place and shape. Sincerely Yours, Natick School Children."

On January 30, 1958 the First National Bank of Natick unveiled drawings of their planned renovation for their future branch. Ribbon cutting was held on Friday June 27, 1958. 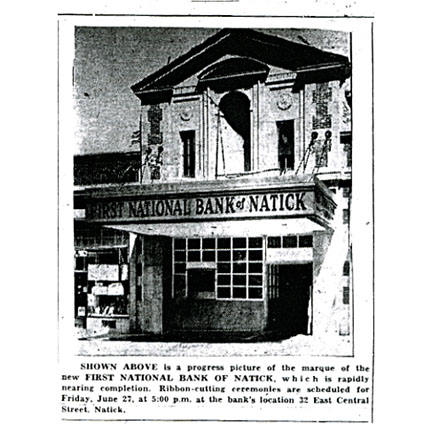 The Bank eventually closed, and the Colonial was razed. The following is the  article that was written for the Metrowest Daily News, dated Sunday June 21, 1987

The old Colonial Theatre will go the way of nearly all the big old bijous in New England when the A.J. Lane Co's wrecking ball knocks it down within a couple of weeks.
Atrium domed condominiums and retail stores will be built on the East Central St. property that once was a Saturday night mecca for those needing a night out.
The spacious privately owned theaters that hit their heyday after World War I are disappearing, according to Boston Theater historian Fred MacClennan.
"In World War I, they built theaters," he said. "In 1987, they build condos."
The Wellesley Playhouse also recently stopped taking tickets and was sold to a developer, who plans to put upscale boutiques on the property.
The 1502 seat Colonial, decorated in an early American style, hasn't been used as a theater since the late 1950's but when it opened in 1929, movies were at the height of their popularity and the film industry was the third biggest in the country, MacClennan said.
But the idea of bringing the movies to the suburbs never really caught on.
Natick's Nicholas Arthur who worked as an usher and handyman off an on over the years, remembers when the Colonial first opened at its center of town location. A night out at the movies was an event, with a doorman and reserved seats for the most popular movie of the week.
Favorites that Arthur saw at the Colonial included "The Good Earth" with Paul Muni and the Bing Crosby and Bob Hope "Road" pictures. the two reel movies were screened at 8 P.M..
Vaudeville shows were held every Friday night. And because the Colonial had the biggest space in town, Town Meetings convened there.
Despite attempts to keep a steady stream of moviegoers filling the seats, the house closed in the late 1950's.
The destruction of the suburban moviehouses is in part the fault of their prime location. MacClennan said "They're on prime parcels, right in downtown. With the tax rate and the tax structure, if you're not doing something with prime property, you almost got penalized. Anything that occupies space like the Colonial does is going to pay for the parcel."
MacClennan recently took a walk down the theater's aisles. Only portions fo the faded wine velvet curtains were still hanging and the Art Deco crystal chandelier had been shattered by vandals.
Social change and the advent of television were big factors in falling box office receipts. People stopped going out in groups and stayed home to watch TV, and the video phenomenon has further cut into a declining theater audience, MacClennan said.
Remembering long lines outside the Colonial on weekends, Arthur said he still thinks the theater whould not have been closed. It was a gathering place and a night out, he said, besides being a place where practically everybody in town worked.
Richard Parris of Natick used to fill in as a projectionist at the Colonial and at nearly all the other theatres in the area. The big pictures opened in the suburbs about three weeks after they appeared in the city, and showed for a week.
Presentation was the key difference between movies then and now, he said. The colorful impressive stage, the excitement of being out and seeing people are unmatched today, Parris said.
His favorite pictures include "Gone With the Wind" "You Can't Take it With You" and "Mr. Smith Goes to Washington".
While innovations like Cinemascope and stereo sound seemed necessary to shore up attendance, they often proved so expensive that they defeated their purpose and the theaters went under, Parris said.
After the Colonial closed, its lobby was used as a bank and the rest of the building was used as a warehouse. After a fight with local historians over whether the facade of the theatre should be saved and incorporated into the new building, the Lane Co. won approval from the Zoning Board of Appeals to tear it down and put up a new structure.
The building is scheduled to be torn down around July 1, 1987.
Even with the building gone, a little bit of the Colonial will remain. with Lane's permission, MacClennan rescued the crystal chandelier and donated it to a Boston Theatre whose chandelier was stolen.

Back to My Favorite Places Home Page