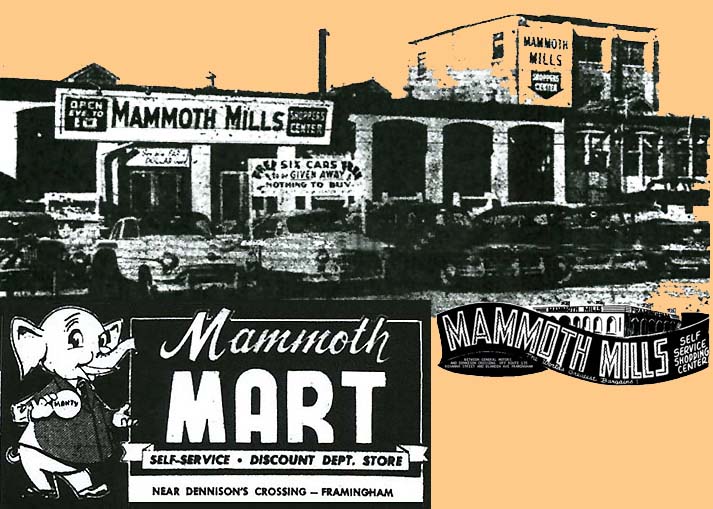 Mammoth Mills was founded by Max Coffman in Framingham in the Spring of 1956. The no-frills factory store was a lot like an early Building 19. The first store in Framingham was located off Irving St. behind Roxanna St. near what is now a Fitness and Health Center. It was one of the earliest discount department stores in the country. Others which were opening around the same time were Kings Department Stores, Ann & Hope, and Zayres. The idea of Mammoth Mills was based on the idea used in supermarkets, where cash registers were centrally located, rather than being located in each department, in order to lower overhead.

Mammoth Mills was a favorite store for closeouts, factory seconds, and bargains in general. Unlike many other discount stores, it had a grimy, dark and informal appearance.

In 1962, the store became a Mammoth Mart in honor of it's mascot, Marty the Elephant, and moved to Pond St. in Ashland, in what is now a Market Basket Plaza.

In 1962, there were 5 stores, by 1966 there were 20 stores, and at the height of it's popularity in the late 1960's, there were 89 stores with locations from Presque Isle Maine, to North Carolina. Stores were also located in Maryland, New York, and all over New England. There were stores in Amesbury, Fairhaven, New Bedford, West Bridgewater (location of the Home Office), Weymouth, Burlington Vt., Southgate Plaza in Portsmouth NH, Derby Vt., Guilford Connecticut, as well as Waterville, and Augusta Maine.
The chain was mentioned in an early Steven King novel, when a character buys a new winter coat in a Mammoth Mart.
Mammoth Mart filed under Chapter 11 Bankruptcy in 1974, and was later acquired by King's Department Stores in 1978.