Elias M. Loew, an American success story, opened the Hollis Theatre on Hollis St. Framingham on Thursday September 8, 1938. Mr Loew began his career as an usher in New York City. He made a visit to Boston, and decided to remain, becoming an usher for the Comique Theatre in Bowdoin Square, Boston. Careful savings and some borrowed capital aided him to buy his first theatre, the Dreamland Theatre, a small playhouse in Lynn Massachusetts. After a complete renovation, standing room only was a nightly occurrence, and so with this venture successful, he decided not to stop. Shortly after he acquired a theatre in Portland Maine which became popular. He opened a second house in the same city two years later. Soon, he owned several more theatres in Roxbury and Fitchburg.
His system of selection of pictures and management of his theatre was a success. He had truly learned the business from the bottom up.
In the next 15 years his circuit grew. When the Hollis opens, it will be the 43rd theate in the E.M. Loew chain, which runs all the way from New England to Florida. 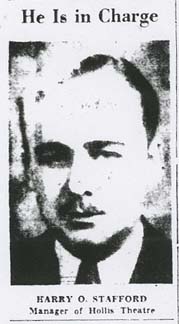 Harry O. Stafford, came to Framingham with a solid background in Theatre Management. His father owned and operated two theatres in New Haven Conn. Mr Stafford's wife previous to her marriage, was also actively concerned with the New York producer C. Dillingham, in the production of musical comedies, associating with such stars as Fred Stone, Eddie Dowling, Joe Cook, Eleanor Powell and the late Will Rogers.
After graduating from Syracuse University Mr. Stafford entered the employ of Paramount Theatres as Manager of their Astoria Theatre in New York City. Two years later, he became affiliated with The Comerford Theatres of New York state as their Advertising Manager in Ithaca. After four successful years, he accepted a management position in Albany NY under the direction of Warner Brothers. Two years later the urge to conduct his own business led him to assume ownership of his own theatre in Troy NY. In 1937, he sold his interests and came to Framingham to manage the Hollis.
The Hollis contained the latest in projection equipment. Unlike many theatres, the projection booth covered the entire width of the rear of the auditorium, with a separate room for rectifiers and switches, as well as a private bathroom for the operators. The projection equipment consisted of two Simplex machines with Brenkert high intensity lamphouses.
An elaborate system of sprinklers together with the customary fire extinguishers and fire doors on the machines eliminate any hazard of conflagration. In addition the portholes of the booth were covered with a thick plate glass which also kept projector noise from being heard in the auditorium.

The Hollis suffered from the effects of television as well as the opening of the Cinema in Shoppers World, and closed in March of 1954. The Manager, Irving Finn, became Manager of the St. George shortly after.